The Phyllis A. Whitney Collection 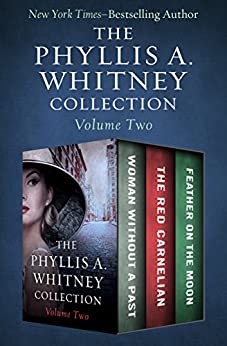 A trio of romantic spellbinders from a New York Times–bestselling and Edgar Award–winning “master of suspense” (Mary Higgins Clark).

Three atmospheric psychological thrillers from the undisputed “Queen of the American gothics” (The New York Times).

Woman Without a Past: Popular mystery novelist Molly Hunt has just made a stunning discovery: She’s the daughter of South Carolina blue bloods and was kidnapped as an infant from their plantation in Charleston. But her birth family is a strange brood and meeting them is not the happy reunion she expected. It’s only when Molly finds a letter from her late father that she comes to realize how much danger she’s in—and what it will take to escape the shadows of Mountfort Hall alive.

The Red Carnelian: Linell Wynn, copywriter for Chicago department store Cunningham’s, can put a clever spin on everything. But she’s at a loss for words when, after closing time, she finds the manager’s corpse in a window display. Considering her volatile history with the victim, she’s the number one suspect—until a second murder throws the store detective for a loop and plunges Linell into the investigation. Now she’s working after hours to find a killer, and she has more to lose than her job.

Feather on the Moon: It’s been seven years since Jennifer Blake’s daughter vanished, but she’s never given up hope of finding her. Then comes the call from a wealthy dowager a continent away who believes the girl living in her own home could be Jennifer’s long-lost child. When Jennifer arrives at the sprawling Vancouver Island estate she must navigate a maze of threatening secrets if she’s to find her daughter—and solve the most shattering mystery of all, locked away in the shadows of Radburn House.