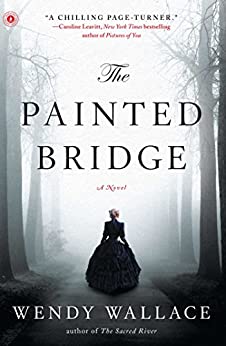 Spellbinding and intricate, The Painted Bridge is a tale of secrets, lost lives, and a woman seizing her own destiny: “A chilling page-turner about the muddy line between sanity and madness” (Caroline Leavitt, author of Pictures of You).

Outside London behind a stone wall stands Lake House, a private asylum for genteel women of a delicate nature. In the winter of 1859, recently married Anna Palmer becomes its newest arrival, tricked by her husband into leaving home, incarcerated against her will, and declared hysterical and unhinged. With no doubts as to her sanity, Anna is convinced that she will be released as soon as she can tell her story. But Anna learns that liberty will not come easily. The longer she remains at Lake House, the more she realizes that—like the ethereal bridge over the asylum’s lake—nothing is as it appears. She begins to experience strange visions and memories that may lead her to the truth about her past, herself, and to freedom…or lead her so far into the recesses of her mind that she may never escape.

Set in Victorian England, as superstitions collide with a new psychological understanding, novelist Wendy Wallace “masterfully creates an atmosphere of utter claustrophobia and dread, intermingled with the ever-present horror of the reality of women’s minimal rights in the nineteenth century” (Publishers Weekly). The Painted Bridge is a tale of self-discovery, secrets, and a search for the truth in a world where the line between madness and sanity seems perilously thin.