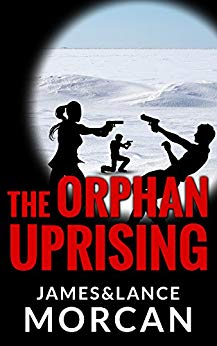 In this explosive conclusion to The Orphan Trilogy, the ninth-born orphan's dramatic story resumes five years after book one, The Ninth Orphan, ends.Having eluded his former masters at the Omega Agency and escaped his past life as an operative, Nine has married his soul mate, Isabelle. They've carved out a new life for themselves, off the grid, in the remote islands of French Polynesia.The contented couple have a five-year-old son, Francis, who is a chip off the old block and who has inherited his father's unique DNA. Francis will soon have a sister as Isabelle is about to give birth to a baby girl.Their idyllic lifestyle is shattered when Francis is abducted by operatives in the employ of the Omega Agency, the shadowy organization that brought Nine into the world and once controlled every aspect of his life. The terrified boy with the unique DNA is dispatched to one of Omega's underground medical laboratories for scientific testing and experimentation.Nine is desperate to find Francis before Omega can harm him. He soon finds he's up against his fellow orphans - all elite operatives as he once was - who are under orders to kill him on sight. To overcome them, he must call on all his former training and skills. His search takes him around the world - from Tahiti to America, Germany, Greenland and the Congo.To add to Nine's worries, he has a serious heart condition that requires immediate surgery. The clock is ticking and he knows he's on borrowed time. It's a race against the clock to find his son before Omega can harm the boy - and before his heart gives out.Written by father-and-son writing team Lance & James Morcan (authors of The Ninth Orphan, The Orphan Factory and The World Duology), The Orphan Uprising is the third book in The Orphan Trilogy. A feature film adaptation of The Ninth Orphan is currently being developed.