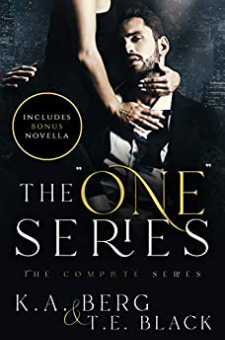 INCLUDES BONUS NOVELLA--LIMITED TIME ONLYFrom K.A. Berg and T.E. Black comes a story of the forbidden desire—a story so delicious you'll need more than One Taste.One TasteSebastian – I live a good life. I'm successful, the CEO of the advertising firm my father built from the ground up. I've been deemed a god in the sheets by the female population of New York City and have the equipment to match. Life is great. Until my social life messes with my professional life. I've become a frequent flyer on the gossip pages—a detriment to business. Just as my perfect life is starting to crash down around me, I meet her. All I wanted was a taste, but I got much more than I bargained for. Devin – Seven years is a long time, but it’s good to be home. I’ve missed this place and the people in it. I’m living with my best friend, I landed a great job as an Interim CEO which will look great on my resume, and I hooked up with a hot guy I met at a bar. Life couldn’t get much better. That is until I report to my first day at my new job and standing behind the desk waiting for me is the man I spent a sex-crazed night with. He devours me with his eyes letting me know things between us aren’t over. Except, he doesn’t get to make that decision; I do. But, I no matter how hard I try, I can't seem to stop this disaster from happening. One RegretSebastian – Who would have thought the woman who consumed me after only one night would wind being the new Interim CEO of my company? It was my sister’s doing, but it doesn’t change that she’s here, right in front of me. She wants nothing to do with me, and I want nothing more than to claim her, make her mine. All I want is to worship her like the queen she is, but she’s more interested in fighting the attraction between us. Too bad for her I can play this game better than her, and I play to win. Devin – Life just got a lot more complicated and one night of fun has turned into regret real quick. Sebastian Brooks stole a small piece of me our night at the hotel, and I haven’t been able to take it back as hard as I’ve tried. I want to be with him, but I’m not sure if what I stand to gain is more than what I stand to lose. What will happen if I choose him over everything I’ve worked for? He’ll still own a company, but I, however, could be committing career suicide. I want him so badly. I want us and the way we fit together seamlessly, but there are many reasons why we shouldn’t do this. The doubts linger in the back of mind, and when unforeseen circumstances crash into us, it leaves me questioning everything, yet he keeps me coming back.One LoveSebastian – Devin warned me what would happen if we kept sneaking around together, but I was sure I could control it. I was being selfish when it came to her. I wanted her and that was it. My mind was set and I was on the path to winning her heart, until everything blew up in our faces. I caused pain to the one woman I promised to protect, and now I have to figure out how to make it all right. There’s nothing worse than seeing the look of fear on her face as the seriousness of our reality falls down on her instead of me. One thing no one counted on, though, was just far I’d go to save her. I’d walk through fire to keep Devin from living out her worst nightmare. Devin – I’ve never felt so many emotions for one person before in my life. Love. Anger. Sadness. Jealousy. It’s all there. It’s a constant up and down when it comes to Sebastian and me. He’s confident he can fix it all, while I’m still trying to get over my own fears. Except those fear become reality in the most terrifying way. We’ve been through things most people only read about. All we want to do is love each other, but someone else has other, more gruesome, plans for us