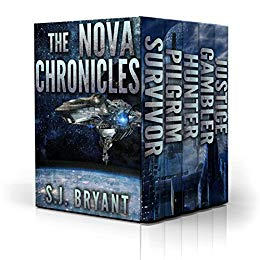 Plasma pistols, busted ships, and space adventure.Nova is an adventurer with a heart of steel. All she wants is a quiet life and enough money to keep her ship flying.The universe has other plans.Between ancient aliens bent on universal destruction, and a government bent on universal control, Nova can't catch a break.Grab your space racer and strap in - this is going to be one wild ride!Get it now.REVIEWS"A strong female lead role has science fiction in an uproar as she steers this genre to the front-line, not the typical scenario. A refreshing change from the traditional romp of sci fi meets fantasy saga. An enjoyable read and I'm looking forward to the sequel."~Amazon Top 500 Reviewer, Carol Newsom"If you are truly a Sci-fi fan then this is the book for you... Do yourself a great favour and purchase this book immediately and you won't regret it!!"~ Amazon Reviewer, Gayle Armstrong"Excellent character portrayal, fast moving"~ Amazon Reviewer, BanderSurvivorAn Ancient Evil Rises....and it wants its universe back.Nova is a bounty hunter with a rusted ship and nothing to lose. During a routine flight, she's caught in the middle of an alien uprising. The universe has never done anything for her, so why should she have to save it?An Unwilling Hero.Nova can't stand aside and do nothing, but this enemy is more powerful than she could ever imagine.Will she be able to stop them?Is this the end of the human race?PilgrimThink it's dead? Better be sure.Nova is a renegade bounty hunter in need of cash. The target: a colonisation ship that went radio silent more than a hundred years ago.Easy.But Nova's search for salvage soon becomes a desperate fight for survival. The colonists aren't quite dead; they've evolved--mutated--and even darker secrets lurk beneath this planet's surface.HunterBlood.Walls. Floor. Ceiling.That's what happens when vampire covens go to war.But these aren't sparkling teenagers, these are planet-roving monsters who want to suck every human dry.Nova is a renegade bounty hunter who shoots first and asks questions later--if at all. The job: capture an escaped prisoner. The catch: he's got fangs.She didn't expect to be fighting for her life against blood-thirsty monsters with super-human strength.But this massacre has only just begun.GamblerWhen Aart goes missing Nova is forced to travel back to her hated home planet of Tabryn. Her latest job to solve a casino heist takes her deep into the fetid underbelly of the corrupt planet, and faces from her past start to resurface. It will take all of her strength to stay afloat as the past tries to pull her back to where it all began. Discover the planet that made the bounty hunter in Book Four: Gambler.JusticeAfter the Ancients and the lecheons, Nova is looking for something simple, but life is never that easy. Murder, man-eating plants, and rumours of cannibalism from the Inner Galaxies all await Nova in Book 5: Justice. This box-set contains the first five books in The Nova Chronicles. Enjoy full-throttle action and adventure.