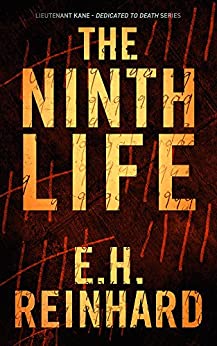 The Ninth Life: Book Two in The Lieutenant Kane Dedicated to Death Series

An anonymous phone call sends Tampa homicide lieutenant Carl Kane straight to the scene of a murdered woman, a sight far too familiar in his line of work.

What’s even more familiar is the manner in which the woman’s life was taken—the slaying is identical to that of victims of a satanic lunatic named Koskinen, yet Kane had captured and put the man away years before.

It seems that Koskinen has found himself an admirer, maybe a follower or, worse, someone to kill on his behalf.

The first body is just the beginning. The ending holds something much worse.

“Lt. Carl Kane thought he’d closed the books on serial killer Larry Koskinen, who is serving a life sentence in a state mental hospital for carving up his victims—and trying to carve up Kane himself—years ago. But when Carl discovers a dead body exhibiting the killer’s same MO, he finds himself revisiting a case he wants to close the books on for good. As new victims pile up, Reinhard ratchets up the tension big-time, and his fast-paced tale and fine plotting will keep readers turning pages long into the night.” Angela M., Editor, Red Adept Editing

The Dedicated to Death series (in order).
1) The First Shot
2) The Ninth Life
3) Body of Work