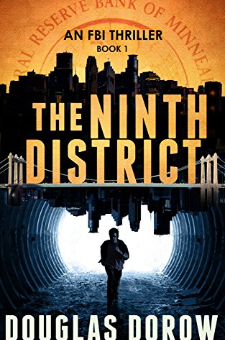 The Federal Reserve has never been robbed. Suspense, intrigue, and dazzling plot twists power this tale of an FBI special agent and rookie investigator racing through the darkest layers of Minneapolis to chase a sinister Federal Reserve robber.FBI Special Agent Jack Miller, pulled into a high-profile case to mentor a new agent, finds himself in a clash with the toughest opponent of his career. The chase culminates in the bowels of the city, in the storm sewers and tunnels beneath The Ninth District Federal Reserve of Minneapolis.Reader Praise for Douglas Dorow & The Ninth DistrictAddicting!The story kept me so enthralled that I neglected to eat until I finished it!Reminded me of Robert Crais. Similar hook and fast, exciting pace.Very exciting, right up there with Michael Connelly and James PattersonIf John Sandford has a nephew, he might well be Douglas Dorow...writing reminds me of Sandford and not just because the novel is set in MN.I love the Catherine Coulter FBI books, so I decided to read this one. It was quite a surprise! It's an exciting book that is fast-paced and a fun read. I like books that "make" me want to keep reading.Great story line, loved the characters. Excellent buildup of the suspenseReading this thriller was sheer enjoyment! Douglas Dorow has a special talent for developing both, a story and the perfect cast of characters to bring it to life. THE NINTH DISTRICT is a quick read guaranteed to grab your attention from the Get-GO.Taut Exciting and Great Read! Bravo Mr. Dorow!This is the first book I have read by this author....but not the lastThe FBI Series in Order:The Ninth District – FBI Thriller Book 1SuperCell – Critical Incident #1 (Spin-off novella from The Ninth District)A short story ALL SALES FINAL in the Twin Cities Sisters in Crime anthology Festival of Crime. Publishers Weekly says “The final entry, Douglas Dorow’s satisfying “All Sales Final,” involves two deceitful Chicago bargain hunters at the Pelican Rapid’s Art in the Park festival.”Douglas Dorow’s FBI Series eBook Categories:- FBI Series - Crime Thrillers - Police Procedurals - FBI Hostage Rescue Team Series- Mystery & Crime- FBI Agent Series- Thriller Crime Series