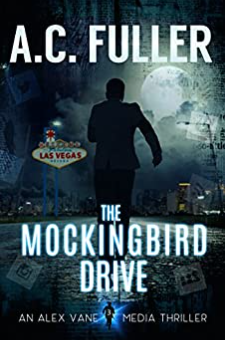 Five people are dead at a small Las Vegas newspaper...The police and the media are running with the "official story"...But Alex Vane is after the truth.Alex Vane was once a top investigative journalist. Now he peddles celebrity gossip and clickbait listicles, watching from a distance as his wife moves on with her life - without him. But Alex's past catches up to him when he learns that an old source, James Stacy, has been killed in a random mass shooting.James left Alex one last scoop: a 50-year-old hard drive that may contain a secret worth killing for...and the name of the one person who can help him access the data. That person is Quinn Rivers, a paranoid and reclusive computer expert who believes the CIA is tracking her every move. And she may be right.When Alex shows up at her door with the hard drive, armed operatives are right behind him. Now Alex and Quinn are on the run. There is no one to trust, nowhere to hide, and nothing but the hard drive to prove that James Stacy's death wasn't random at all.What People Are Saying About The Mockingbird Drive and A.C. Fuller:"The Mockingbird Drive is like if Lee Child wrote a John Grisham novel, if Grisham had been a journalist instead of a lawyer."-Amazon Reviewer"A talented new writer sure to do damage to the best-seller lists."-Robert Dugoni, #1 Amazon and New York Times Bestselling Author of My Sister's Grave"Elite Indie Reads anticipates that Fuller will soon be a household name."-Elite Indie Reads"Read the literary equivalent of heroin."-Amazon ReviewerGrab your copy today!Series List (can be read as standalones or chronologically):The Anonymous Source (An Alex Vane Media Thriller, Book 1)The Inverted Pyramid (An Alex Vane Media Thriller, Book 2)The Mockingbird Drive (An Alex Vane Media Thriller, Book 3)The Shadow File (An Alex Vane Media Thriller, Book 4)The Last Journalist (An Alex Vane Media Thriller, Book 5)