The Missing Sapphire of Zangrabar 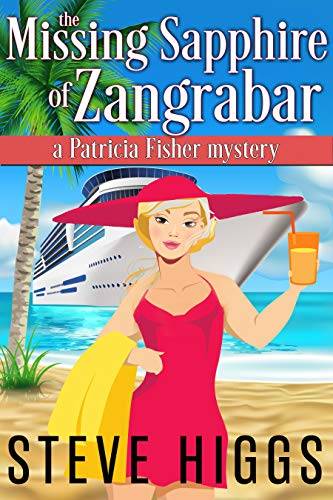 A thirty-year-old priceless jewel theft and a man that really has been stabbed in the back. Can a 52-year-old, slightly plump housewife unravel the mystery in time to save herself from jail? When housewife, Patricia, catches her husband in bed with her best friend, her reaction isn't to rant and yell. Instead, she calmly empties the bank accounts and boards the first cruise ship in nearby Southampton. There she meets the unfairly handsome captain and her appointed butler for the trip - that's what you get when the only room available is a royal suite! But with most of the money gone and sleeping off a gin-fuelled pity party for one, she wakes to find herself accused of murder; she was seen leaving the bar with the victim and her purse is in his cabin. Certain that all she did last night was fall into bed, a race against time begins as she tries to work out what happened and clear her name. But the deputy captain, the man responsible for safety and security onboard, has confined her to her cabin and has no interest in her version of events. Worse yet, as she begins to dig into the dead man's past, she uncovers a secret - there's a giant stolen sapphire somewhere and people are prepared to kill to get their hands on it. With only a Jamaican butler faking an English accent and a pretty gym instructor to help, she must piece together the clues and do it fast. Or when she gets off the ship in St Kitts, she'll be in cuffs! The Missing Sapphire of Zangrabar is the first in a 10-book series as Patricia Fisher rediscovers herself, uncovers a skill for unravelling mysteries, and from the ashes of her marriage, becomes the phoenix she was always meant to be. Don't miss this funny, cozy mystery series. Author guarantee: This series contains no cussing and no graphic descriptions of sex of violence.