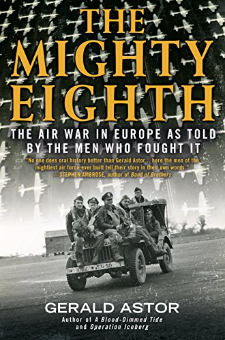 In the skies of World War II Europe, the Eighth Air Force was a defining factor in turning the tide against the Nazis. In these gripping oral histories, the sacrifice, savagery, and supremacy of the “Mighty Eighth” is described by those who experienced it...and survived it. At the outbreak of World War II, America was woefully unprepared for a fight, though Europe was already years into the battle. Soon, though, America’s war machine was rolling out pilots, engineers, planes, and materials in astounding numbers. It was called the Eighth Air Force—and it would hit the Nazi juggernaut like a lightning bolt. Launching a then-groundbreaking campaign of daylight bombing runs, the men of the Eighth would suffer more casualties than the entire Marine Corps in the Pacific theater. But they would also prove to be the most effective weapon against the enemy, taking out strategic targets such as munitions plants and factories that were vital to the German war effort and grinding them to a halt. In The Mighty Eighth, the men who fought in the greatest air war in human history tell their stories of courage and camaraderie as only those who were there can tell them.