The Mechanics of Mistletoe 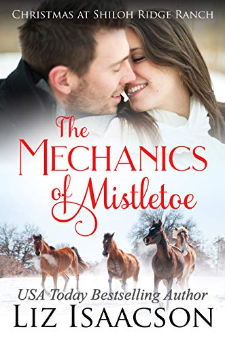 He can be a teddy or a grizzly. She's a genius with a wrench. Can the pretty mechanic tame this cowboy's wild side, or will they both be left broken-hearted this Christmas?Bear Glover can be a grizzly or a teddy, and he's always thought he'd be just fine working his generational family ranch and going back to the homestead alone. But he's had a crush on Samantha Benton for a while now, and he's decided it's time to do something about it.But his first date with Sammy is a spectacular disaster. He's embarrassed and doesn't call her back, but when three tornadoes hit Three Rivers, his first thought is of the beautiful woman he'd really like a second chance with.Sammy feels like she has to be the strong one in her family. Ever since her sister and her husband died, Sammy's taken care of Lincoln, her sister's son, and her aging parents. And three tornadoes?They've only added the weight of the world to Sammy's shoulders. School's been canceled, and she has nowhere for her eight-year-old to go.Bear know exactly what to do with an eight-year-old boy on a ranch, and he offers to take Lincoln up to Shiloh Ridge Ranch with him every day. Bear has a lot of contacts in town, and he's able to help Sammy and her parents get cleaned up and back in their houses in record time. In fact, Bear has an answer for everything—which only makes Sammy feel weak. And she hates nothing more than feeling weak. Can Sammy realize that the Lord may have given her Bear so she doesn't have to be strong all the time? Or will she sabotage their relationship this holiday season?