The Making of a Navy SEAL 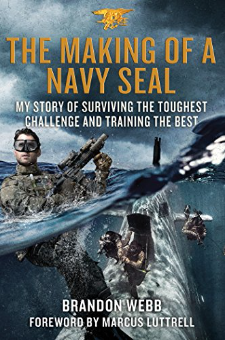 BEFORE HE COULD FORGE A BAND OF ELITE WARRIORS… HE HAD TO BECOME ONE HIMSELF.Brandon Webb's experiences in the world's most elite sniper corps are the stuff of legend. From his grueling years of training in Naval Special Operations to his combat tours in the Persian Gulf and Afghanistan, The Making of a Navy SEAL provides a rare and riveting look at the inner workings of the U.S. military through the eyes of a covert operations specialist.Yet it is Webb's distinguished second career as a lead instructor for the shadowy "sniper cell" and Course Manager of the Navy SEAL Sniper Program that trained some of America's finest and deadliest warriors—including Marcus Luttrell and Chris Kyle—that makes his story so compelling. Luttrell credits Webb's training with his own survival during the ill-fated 2005 Operation Redwing in Afghanistan. Kyle went on to become the U.S. military's top marksman, with more than 150 confirmed kills.From a candid chronicle of his student days, going through the sniper course himself, to his hair-raising close calls with Taliban and al Qaeda forces in the northern Afghanistan wilderness, to his vivid account of designing new sniper standards and training some of the most accomplished snipers of the twenty-first century, Webb provides a rare look at the making of the Special Operations warriors who are at the forefront of today's military.Explosive, revealing, and intelligent, The Making of a Navy SEAL provides a uniquely personal glimpse into one of the most challenging and secretive military training courses in the world.