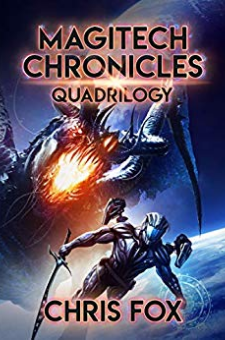 Over 1,200 pages of Epic Space Fantasy for one unbelievable priceTheir fleets are in ruins. Their worlds burn. The Godswar has come again.Tech Mage (book 1)Aran awakens in chains with no memory. He’s conscripted into the Confederate Marines as a Tech Mage, given a spellrifle, then hurled into the war with the draconic Krox and their Void Wyrm masters.Desperate to escape, Aran struggles to master his abilities while surviving the Krox onslaught. Fighting alongside him are a Major who will do anything to win, a Captain who will stop at nothing to see him dead, and a woman whose past is as blank as his own. Caught between survival and loyalty Aran must choose. If he flees he will live, but the Krox will burn the galaxy. Stopping them requires a price Aran may be unable to pay:Learning to trust the very people who enslaved him.Void Wyrm (book 2)A Suicidal Quest Into the Umbral DepthsMajor Voria stands ready to accept the cost for her actions at Marid. Stripped of command and resources, Voria must find a ship and rally a crew. Somewhere within the Umbral Depths lays a hidden world, a world that the dead god Marid intended her to find.Aran faces a choice. Halt his war mage training, and in the process give up clues to his past, or abandon Voria. Aran sacrifices everything to follow Voria on a suicidal quest into the one place where even gods fear to tread.On a bleak world in the deepest darkness lays an object of enormous power, one that could turn the tide of the war against Krox. But Voria isn't the only one seeking the weapon. Spellship (book 3)Voria, Aran, and Nara survived their trip into the Umbral Depths. They retrieved the Talon, and are now searching for the First Spellship, the key to victory in their war against the Krox. Their search leads them to Virkonna, the home of the Last Dragonflight, a world where Dragons still rule. The world where Aran was born.War Mage (book 4)The Krox have finally reached their end game, and the sector will never be the same. Their relentless fleet darkens the skies of New Texas, home of the fabled Ternus shipyards. Their only hope lies with their sworn allies, the Shayans. But the Shayans refuse to help.Only Aran and his company can keep their leadership alive long enough for Voria to bring reinforcements and the fabled Spellship. If they fail, the entire world burns, and Ternus morale will collapse with it.The Magitech Chronicles is already five books deep, and book six will be released soon. Our pen and paper roleplaying game is in development, so if you enjoy Dungeons & Dragons, Spelljammer, Starfinder, or any other roleplaying game, then you are going to love this series.You can find artwork, character sheets, lore, maps and more at Magitechchronicles dot com. “If you grew up playing D&D, Rifts, Spelljammer, or Starcraft, and want to see magic in space done right, then get ready to lose the next forty hours of your life.” — The Author’s Totally Biased Friend