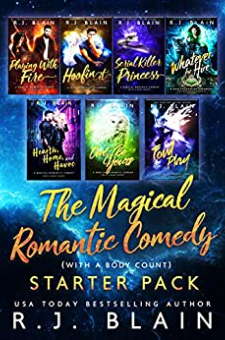 Enter the zany, hilarious world of the Magical Romantic Comedy (with a body count) series with this seven story collection. From a fire-breathing, meat-eating unicorn to a sphinx with a devil problem, what can go wrong will go wrong, nothing is as it seems, and there’s magic around every corner.Warning: these stories contain magic, mayhem, and mythology splashed with humor, romance, and a body count.In Playing with Fire, Bailey Gardener doesn’t need Manhattan’s Most Wanted Bachelor breathing down her neck, but when she’s targeted with a cell phone bomb capable of transforming her home into a stone tomb, she’s tossed headfirst into a mess with her sexist enemy. She definitely doesn’t need to fall in love with the smoking hot police chief. Saving Manhattan will be tough enough.In Hoofin’ It, Shane Gibson’s trip to New York takes an unexpected turn when three corpses and a miniature llama with a spitting problem and an attitude tumbles into his life. Facing off against a sex trafficking ring targeting the woman of his dreams, ancient vampires, murderous criminals, and his parents is only the beginning. Some days, it isn’t easy being an ex-cop.In Hearth, Home, and Havoc, Dakota had never intended to become the single mother of a goddess, but after her abusive ex storms back into her life, she’ll do anything necessary to protect her family.Snakes eat fish, and the mer love tearing apart their serpentine nemeses with their hands and teeth. As for the gorgons… Tulip would rather not think about them at all. In Serial Killer Princess, a serial killer of serial killers must come to terms with her unique heritage while dodging the advances of a wily bodyguard with an unhealthy interest in her and her secrets.Kanika regrets naming her business Whatever for Hire. Fetching a cat out of a tree should’ve been a quick, easy fifty bucks in her pocket. Instead, following one stray thought, the Devil pays her a visit and leaves her with a debt to repay. Owing the Devil a favor is bad enough, but her life is turned upside down when it’s time to pay the piper.After a wildfire took everything from her, Emily Hall made do surviving as a homeless human by day and as an owl at night. In Owl Be Yours, when one of the men responsible for infecting her with lycanthropy comes winging his way back into her life, she must choose between revenge or resuming a normal life. Until Daniel’s return, she never dreamed she might be able to have both.In Fowl Play, the last thing Emma Sansaul needs is to become the next victim of a crazed serial killer. Left with no other choice, she joins forces with Agent Kenneth Bernard, the one man on Earth capable of making her hissing mad one second and in need of a cold shower the next.This collection contains over 500,000 words (1,800+ pages) of magic, mayhem, and hilarity.