The Lost Tomb of Cleopatra 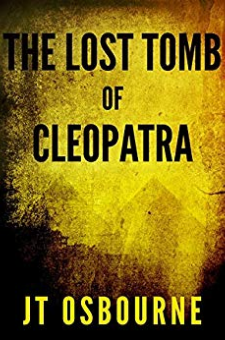 The Queen is Dead. His Secret is Safe.Egypt, 30 BC. Roman soldiers storm a temple in search of Queen Cleopatra. From the shadows, one man watches. Although torture and murder are rife, he smiles. He knows the tomb is empty. His secret is safe.Maverick history professor Brook Burlington is on a quest to solve one of history’s great mysteries. When Brook's ex-boyfriend claims to have made a breakthrough in the case, Brook must swallow her pride (and her feelings) to join his expedition. But is she one step closer to Cleopatra when she discovers a secret message left behind by a previously-unknown stone carver: Find Me and You Will Find Him and Her? Tom Manor's Grand Tour wasn't supposed to end this way. The son of a hedge fund tsar, Tom made the decision to turn his back on the family business and Wall Street life to find his own way. Upon arriving in Egypt, terrorists raid his felucca while it is sailing down the river and Tom is taken as a hostage.When Brook's entourage crosses paths with the lost tourist, they each realize their lives have changed forever, but questions remain. Who is this handsome young American, kidnapped, beaten and left for dead, and what is his connection to the Russian oligarch taking such a keen interest in her work? Find out why advanced reviews of The Lost Tomb have called it "An extremely entertaining combination of historical drama and action thriller," with "insightful, smart and interesting" characters!