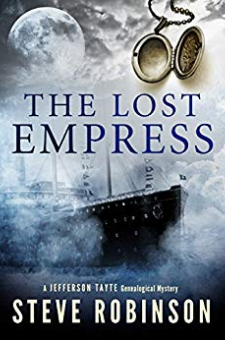 From acclaimed author Steve Robinson comes a bold new Jefferson Tayte mystery.On a foggy night in 1914, the ocean liner Empress of Ireland sank en route between Canada and England. The disaster saw a loss of life comparable to the Titanic and the Lusitania, and yet her tragedy has been forgotten.When genealogist Jefferson Tayte is shown a locket belonging to one of the Empress’s victims, a British admiral’s daughter named Alice Stilwell, he must travel to England to understand the course of events that led to her death.Tayte is expert in tracking killers across centuries. In The Lost Empress, his unique talents draw him to one of the greatest tragedies in maritime history as he unravels the truth behind Alice’s death amidst a backdrop of pre-WWI espionage.This is the fourth book in the Jefferson Tayte Genealogical Mystery series but can be enjoyed as a stand-alone story.