The Lost Book of Moses 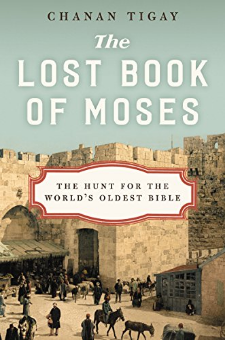 A gripping account of one man'squest to find the oldest Bible in the world and solve the riddle of thebrilliant, doomed antiquities dealer accused of forging it.  Inthe summer of 1883, Moses Wilhelm Shapira--archaeological treasure hunter,inveterate social climber, and denizen of Jerusalem's bustling marketplace--arrivedunannounced in London claiming to have discovered the world's oldest Biblescroll. Written centuries earlier in the barren plains east of the Dead Sea andstashed away in caves, the mysterious scrolls called into question the divineauthorship of the scriptures, taking three thousand years of religiousfaith and turning them upside down. When news of the discovery leaked tothe excited English press, Shapira became a household name. But before the BritishMuseum could acquire them, Shapira's nemesis, French archaeologist CharlesClermont-Ganneau, denounced his find as a fraud. Humiliated, Shapira fled thecountry. Six months later he was dead. Withthe discovery of the eerily similar Dead Sea Scrolls in 1947, investigators reopenedthe case, wondering whether the ill-fated merchant had, in fact, discovered thefirst Dead Sea Scroll, decades before the rest. But by then Shapira's scrolls hadvanished. Tigay,award-winning journalist and son of a renowned Bible scholar, set out to findthe scrolls and determine Shapira's guilt or innocence for himself. The globetrottinghunt that follows vibrates with the suspense of a classic detective tale. Weavingmeticulous research into fast-paced storytelling, Tigay spins a remarkable taleof history and theology; intrigue and scandal; greed, ambition, and thestruggle for authenticity. With a brilliant eye for detail, Tigay takes us fromrestricted storerooms at the Louvre to musty English attics to a floodedJordanian gorge--and to the German countryside where he meets Shapira'saggrieved descendants. At once historical drama and modern-day mystery,The Lost Book of Moses brings to life19th century London and Jerusalem and a cast of rogues, reverends, and relichunters at whose center sits Moses Wilhelm Shapira, a flamboyant, ingenious,and ultimately tragic personality.