The Lord I Left 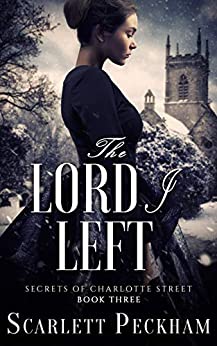 He’s a minister to whores… She’s a fallen woman…

Lord Lieutenant Henry Evesham is an evangelical reformer charged with investigating the flesh trade in London. His visits to bawdy houses leave him with a burning desire to help sinners who’ve lost their innocence to vice—even if the temptations of their world test his vow not to lose his moral compass…again.

As apprentice to London’s most notorious whipping governess, Alice Hull is on the cusp of abandoning her quiet, rural roots for the city’s swirl of provocative ideas and pleasures—until a family tragedy upends her dreams and leaves her desperate to get home. When the handsome, pious Lord Lieutenant offers her a ride despite the coming blizzard, she knows he is her best chance to reach her ailing mother—even if she doesn’t trust him.

As they struggle to travel the snow-swept countryside, they find their suspicion of each other thawing into a longing that leaves them both shaken. Alice stirs Henry’s deepest fantasies, and he awakens parts of her she thought she’d foresworn years ago. But Henry is considering new regulations that threaten the people Alice holds dear, and association with a woman like Alice would threaten Henry’s reputation if he allowed himself to get too close.

Is falling for the wrong person a test of faith …or a chance at unimagined grace?

Fair readers, a note on content, for those who like to know. (If you prefer to be surprised, skip this part!)

This book contains explicit sex; kink and hierophilia (look it up!); feelings of guilt and shame concerning sex; prostitution (both practitioners of and debates about the legality of); parental mortality; toxic families of origin; religious faith, including questioning of and alienation from; allusions to body image issues; and quite a lot of truly despicable cursing.

“The Lord I Left was a nice, trope-tastic surprise. Granted, I’d sign up for pretty much any story featuring a snowy road trip, but I got a lot more than that by the end of this book.” — SmartBitchesTrashyBooks

“An emotional powerhouse…This was a difficult and ambitious topic to take on and I think the author did a fantastic job with it.” — MustReadAlltheRomance.blogspot.com

“The Lord I Left is a glorious slow burn romance that will make you believe that it has stolen your heart, but you will in fact give it up freely.” — Goodreads reviewer

“For fans of Fleabag & the Hot Priest” –GoodReads Reviewer