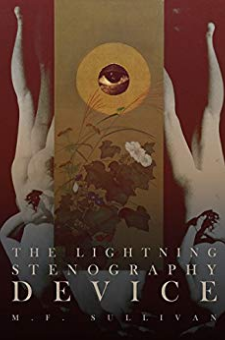 Get hooked up with the most far-out piece of literature you've readin years: THE LIGHTNING STENOGRAPHY DEVICE is a subversive blend ofscience fiction and fantasy, and a one-of-a-kind literary trip.The first marketable thought to text device is released for publicconsumption in 2031. That same year, author Cassius Wagner will have aseizure. At least, that is what the novel says: the novel to which heawakens in fragments one morning after a late night of writing. Thisnovel. Terrified to have a prophetic manuscript unfurling at his heels, his desperation to evade his fate prevents him from consideringthat his lover and editrix, Katherine Beauvoir, might be wrestling with a destiny of her own--one which seems to concern the discovery of a human skull. Told in four parts which peak with the magic-rich fableof a sublingual Huntress as she fights to save her King, THE LIGHTNINGSTENOGRAPHY DEVICE is a mystical voyage of psychological literaryfiction perfect for fans of Philip K. Dick's VALIS Trilogy, and is sureto leave them questioning not just the boundaries of literature, but ofreality.Be sure to check out M.F. Sullivan's next LGBTQ+ cyberpunk/horror book, THE HIEROPHANT'S DAUGHTER (Disgraced Martyr Trilogy #1), available on May 19th 2019!