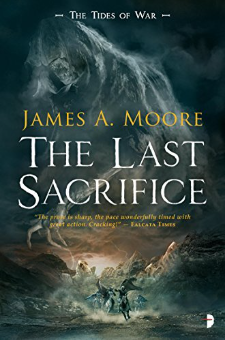 A brave warrior risks a battle with the gods to save his family in this “gripping, horrific, and unique” grimdark fantasy (Seanan McGuire, New York Times–bestselling author) Since time began, the Grakhul—immortal servants of the gods—have taken human sacrifices to keep the world in balance and the gods appeased. But when warrior Brogan McTyre’s entire family is chosen as the next offering, the Grakhul are met with a resistance they never expected.Determined to free his family from their terrible fate, Brogan begins the toughest battle of his life. But when you challenge the power of the gods, you challenge the very fabric of society. Declared an outcast, Brogan and his family are hunted like criminals—though they aren't the only ones who suffer the consequences of their rebellion. When the gods turn their wrath elsewhere, Brogan realizes his fight is not just for the lives and freedom of his loved ones, but for the lives and freedom of the entire world.File Under: Fantasy [ Hunted by the Gods | A Great Refusal | By Land and Sea | The Ultimate Sacrifice ]