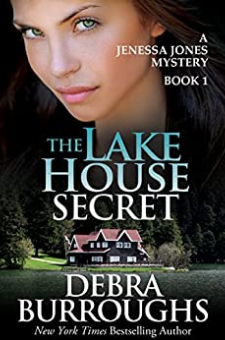 A reluctant homecoming, two men from her past, and a chilling murder to solve... Home is the last place reporter Jenessa Jones wants to be. It's been 12 years since the journalist's father sent her away, and the only thing that could bring her back was the man's funeral. Assigned to cover a local discovery of human remains near a frighteningly familiar lake house, she is shocked when Logan, her high school love, is named the prime suspect. Despite her better judgment, Jenessa digs deeper to clear Logan's name. But when she discovers an old friend named Michael has matured into an arrestingly handsome police officer, she's torn between the attractive lawman and her feelings of the past. As Jenessa uncovers clues and falls hard for Michael, she fears that leaning into a new love could condemn the old one... Will Jenessa catch the killer and find her second chance at happiness before a town full of secrets consumes her all over again? The Lake House Secret is the captivating first book in the Jenessa Jones mystery series. If you like strong-willed heroines, handsome men, and romantic whodunits, you'll love Debra Burroughs' engaging novels. >>> Scroll up and grab The Lake House Secret to unlock a killer romantic mystery today!      "I loved this book!! I can't wait to read the next one."   ~ Natalie Hardie   "Very engaging book! Her characters have depth and intensity. A heartwarming story..."   ~ Linda     OTHER BOOKS by New York Times bestselling author Debra Burroughs:  The Stone House Secret, a Jenessa Jones Mystery: Book 2, Reporter Jenessa Jones is knee deep in a scandalous murder investigation when her police detective boyfriend's ex-wife comes back to town. She throws a monkey wrench into their budding romance and puts Jenessa's life in danger.   The Boat House Secret, a Jenessa Jones Mystery: Book 3, Caught between her old flame and her new love, reporter Jenessa Jones must do some fancy footwork to stop a murderer who is set on killing her to kill the story she's chasing.  The Gate House Secret, a Jenessa Jones Mystery: Book 4, Jenessa's nemesis digs up a long-buried secret and threatens to expose it. She is soon rocked to the core by a scandalous murder that threatens everything she holds dear.  The Scent of Lies, A Paradise Valley Mystery - Book 1,  When private-eye Emily Parker digs into her late husband's cold-case murder, she discovers he may not have been who he claimed. Can she discover the truth with the help of her best friends and the handsome new detective in town? The 1st book in a captivating cozy Murder Mystery and tender Romance series that will keep you guessing until the very end. (think "Stephanie Plum" meets "Nancy Drew")     ***All books available in The Paradise Valley Mysteries***The Scent of Lies: Book 1The Heart of Lies: Book 2The Edge of Lies: Book 2.5, a Short Story of Evan & EmilyThe Chain of Lies: Book 3The Pursuit of Lies: Book 4The Color of Lies: Book 4.5, a Short Story of Colin & MirandaThe Betrayal of Lies: Book 5The Harbor of Lies: Book 6The House of Lies: Book 7(*Most enjoyable if these books are read in order.)   PARADISE VALLEY MYSTERIES Box Set #1, Books 1 - 3PARADISE VALLEY MYSTERIES Box Set #2, Books 4 - 6     Three Days in Seattle,  When LA photographer Kate McAllister flies to Seattle in search of her missing sister, she finds irresistible real estate agent Ryan instead. Soon the two are entwined in a vengeful murder plot -- and a simmering love affair....  (A light Romantic Suspense in the Emerald City)