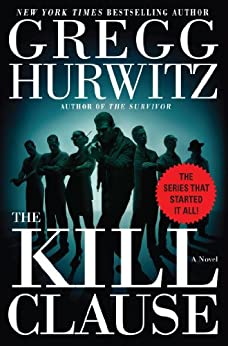 The series that started it all!A riveting and explosive novel, The Kill Clause is a brilliantly inventive tour de force by a powerful new master of suspense.Tim Rackley is a dangerous man of honor, a deputy U.S. marshal who is very good at his job—until everything he believes in is shattered by the brutal murder of his own daughter.Betrayed by an imperfect judicial system, Rackley watches helplessly as the killer walks free on a legal technicality. Devastated, furious, and burning with a righteous need for vengeance, he is suddenly forced to explore his own deadly options—a quest that leads him into a shadowy no-man's-land between justice and the law . . . and into the welcoming fold of "the Commission."A vigilante group made up of people like him—relentless streetwise operators who have each lost a loved one to violent crime—the Commission confronts the failings of a system that sets predators loose to hunt again, cleaning up society's "mistakes" covertly, efficiently, and permanently. But as he is dragged deeper into a deadly morass of hidden agendas and murderous justice, Tim Rackley discovers that playing God is an excruciating and fearsome task. When his new secret life starts coming unwound at an alarming speed, he is suddenly caught in the most terrifying struggle he has ever faced—a desperate battle to save his marriage, his career, his life, his soul . . . and everything left that's worth fighting for. Read more