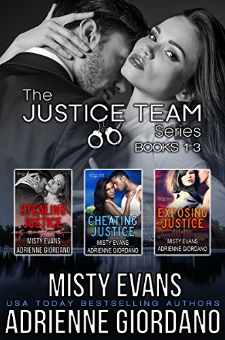 This set includes Stealing Justice, Cheating Justice, and Exposing Justice.Stealing Justice: Justice “Grey” Greystone was fired from the FBI for insubordination. Now the FBI wants him to use his renegade skills to take down a serial killer who’s above the law. To trap the Lion, Grey will need to send the perfect woman undercover.Sydney Banfield runs a women’s shelter and bends the law daily to help victims of abuse escape their painful lives. Three of the women she’s recruited for government jobs have become victims of the Lion. If Syd has her way, the vicious killer will never touch another woman again.Grey and Sydney set a trap—with Sydney as the sexy bait—but the Lion adds a complex twist to his homicidal agenda. With Sydney’s life on the line, Grey must race against the clock to catch a killer who’s as unstoppable as he is evil. Cheating Justice: While investigating a government cover-up, former FBI agent Mitch Monroe is framed for murder. A wanted man, Mitch has no choice but to stay off the grid, and he needs Special Agent Caroline Foster—the FBI’s top sniper and a woman who wants nothing to do with him—to clear his name.After sharing a single night of simmering passion with Mitch a year ago, Caroline hasn’t been able to get him out of her head. Or her heart. He's already jeopardized her job once…helping him now could end her career. But a friend has been murdered, and no matter how Caroline feels about Mitch, he's not the killer. She needs answers, and she needs Mitch Monroe out of her life once and for all. On the run and with no one to turn to, Mitch and Caroline can’t fight the reigniting passion between them. She’ll lose her career if she proves Mitch is innocent…he’ll lose his life if she doesn’t.Exposing Justice: As a Public Information officer for the US Supreme Court, idealist Hope Denby knows how to spin a story. A journalist at heart, she loves being in the middle of a juicy scoop and has her sights set on future Press Secretary for the White House. When the Supreme Court Chief Justice is accidentally killed in a road rage accident, and a high-profile conspiracy blogger claims it was premeditated murder, Hope has to shut down the paranoid blogger—which should be a slam dunk until she discovers he’s not as crazy as she thought and she has more in common with the secretive, hard-hitting investigator then she’d like to admit.Cyber resistance against government corruption isn’t just a theory for Brice Brennan on his blog, The First Amendment Patriot. As a former ATF agent who blew the whistle on his superiors, he’s no stranger to government cover-ups and scandals. An anonymous tip on the Chief Justice’s death sends him searching for answers. What he finds is a sexy, young idealist about to blow his private, behind-the-scenes world to pieces.Brice and Hope couldn’t be more opposite, but exposing justice makes them partners—and puts them on the track of a ruthless killer. As their investigation takes them into the dark underbelly of Washington politics and murder-for-hire, it also takes them into the bedroom where passion erupts and emotional walls crumble. But when the killer makes an attempt on Hope’s life, will Brice be able to keep her safe? Or will blowing the whistle on corruption and greed mean losing the one person he’s allowed himself to love?