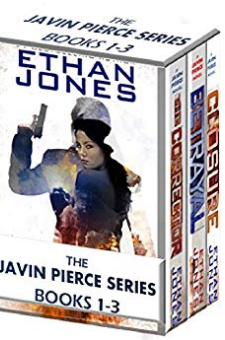 Javin Pierce Spy Thriller Series - Books 1-3 Box SetThe first three thrillers in the best-selling Javin Pierce series:  The Corrector, Betrayal and Closure.The CorrectorWhen covert operations go wrong, the CIS sends in . . . The Corrector.After a botched retrieval operation, Javin Pierce is sent in to complete the mission where others failed. But, before even getting started, Javin and his less-than-trusted partner, Claudia, must deal with a devious terrorist plot. Their search leads them to a flash drive containing scandals that could topple world governments and plunge Europe into absolute chaos if they do not retrieve it in time.How will The Corrector fix this disastrous mission? Uncertain if they can even trust each other and unprepared for the shocking truth that could cost their lives, Javin and Claudia must stop the treasonous plot, retrieve the elusive drive, and save themselves and the entire European continent, all without leaving a trace . . .BetrayalA hero, sent out as a mark. Who’s behind the betrayal?Spy Master Javin wants to eliminate two terrorist masterminds, but he's not the only one looking for them. When the mission suspiciously goes awry, his team is now forced into a dubious alliance with Mossad and the infamous Iranian Islamic Revolutionary Guard.Pursuing the terrorists deep into hostile Saudi Arabia, they not only discover an assassination plot that could topple the Saudi kingdom, but also suspect a traitor has infiltrated their team. Who is behind this betrayal? With suspicions high and time short, can Javin and Claudia unmask the traitor and stop the assassination plot before the Middle East is plunged into an all-out war?ClosureCovert operative Javin Pierce will avenge his betrayal or die trying . . .Wounded, off the grid, and needing to rescue his partner from a Saudi jail ... Javin Pierce wants to settle the score with the traitor who double-crossed him. With time short and options few, Javin strikes a shaky deal with sworn enemies. But before long, alliances crumble, and Javin's rogue team is surrounded on every side. Now, desperate to rescue his partner and exact retribution with no one to trust, can Javin survive the deadliest mission of his life?You will love this fast-paced international suspense, action, and mystery series that will appeal to readers of John le Carré, Ian Fleming, and Daniel Silva. Bonus Content:Short story – Suspicion of Betrayal;Javin Pierce’s Personnel File; &an exclusive excerpt from Retrieval – Book 4.Reviews:Once again, Ethan Jones has managed to grab you at the start and keeps you holding on for dear life until the end...This story is so well written that the deft description will make you feel as is you need a bullet proof vest as you tag along right there with these characters.James Bond...Jason Bourne...move over because Javin Pierce has been activated!Ongoing action, packed with tension and suspense and some spectacular twists; I quite kept forgetting to breathe!Once again Ethan, you`ve nailed it.---GoodreadsScroll up, join Javin now—and be part of the new series that is igniting the globe!