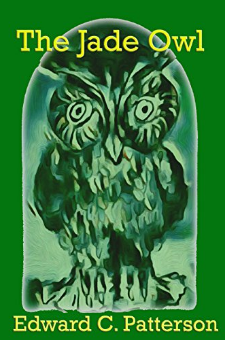 In China they whisper about the Jade Owl and its awful power. This ancient stone, commissioned by the Empress Wu and crafted by a mineral charmer, long haunted the folk of the Middle Kingdom until it vanished into an enigma of legend and lore. Now the Jade Owl is found. It wakes to steal the day from day. Its power to enchant and distort rises again. Its horror is revealed to a band of five, who must return it to the Valley of the Dead before the laws of ch’i are set aside in favor of destruction’s dance. Five China Hands, each drawn through time’s thin fabric by the bird, discover enchantment on the secret garland. Five China Hands, and one holds the key to the world’s fate. Five China Hands. Only one Jade Owl - but it’s awake and in China, they whisper again. Professor Rowden Gray has come to San Francisco following a new opportunity at the East Asian Arts and Culture Museum, only to find that the opportunity has evaporated. Desperate, he means to end his career in a muddle of pity and Scotch, but then things happen. He latches on to a fascinating young man who is pursuing a lost relic that Professor Gray has in fact been seeking. Be careful for what you seek - you may just find it. Thus begins a journey that takes the professor and his companions on a spirited adventure across three-thousand miles of Chinese culture and mystery - a quest to fulfill a warrant long set out to ignite the world in myth and legend. The Jade Owl is the beginning of a series - a legacy that fulfills a terrible truth; and in China, they whisper again. A Finalist in the 2009 RAINBOW AWARDSReview from Rainbow ReviewsSinologist Professor Rowden Gray receives the opportunity of his professional lifetime, a curator position at the fabled San Francisco East Asian Museum of East Asian Arts and Culture, which houses the collection of his late mentor, "Old China Hand" John Battle. Battle's great work had been discredited due to his insistence on the Jade Owl, a mysterious missing artifact commissioned by China's only Empress. When RG arrives, he immediately discovers the position has been rescinded, he encounters a strange young man who proves to be Battle's prodigal son, and learns the Jade Owl really exists. Plunging into a drama worthy of an Errol Flynn swashbuckler, the soon-boon companions and several others are off on a life-and-death chase through San Francisco and then on to Hong Kong as the portal into China. The Jade Owl is a nonstop, don't miss page turner and only the first in a quintology, The Jade Owl Legacy series. Readers, run, do not walk to your nearest book outlet and grab this intriguing gay mystery with its fully realized characters, gay and straight and bi, roller-coaster plotting, and paranormal fantasy elements. The Jade Owl is a true winner.Review from Aricia Gavrial's Book Reviews:In this novel, the artifact is an ancient Chinese object, a six inch piece of Jade carved in the likeness of an owl -- and it's actually a key that opens a box known as the Joy of Finches. What's in the box? That would be telling! But everybody wants the key. The first thing that impressed me about Jade Owl was how knowledgeable about Chinese antiquities the writer is, and about China itself. Shanghai and Beijing are described with the same amount of detail and enthusiasm as San Francisco -- and never having been to either China or the USA myself, I really appreciated the "local color." Many writers, when setting their plots in London, New York, what have you, seem to think that everyone's been there and knows intimately every secret of the city. Not true. So, the first level where Jade Owl succeeds is in "selling me" San Francisco, which is the setting for the first long segment of the book. Jade Owl is a real treat, on a par with the top-notch writers who sell in the gajillions. The Jade Owl is an extremely good read.