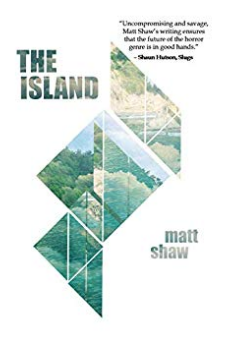 Critically acclaimed bestselling author, Matt Shaw. #1 bestseller in Horror Fiction with hundreds of 5 star reviewsThe IslandTen contestants were sent to a deserted island in the Pacific Ocean, where they'd be left to fend for themselves for a number of weeks, as part of a new reality television show. After a quick weekend learning basic survival skills, these people were dumped on the island's shoreline with basic rations, basic tools and equipment they could use to document their journey. Also tucked in the supplies were radios with which to communicate with the show's producers if they needed evacuation at any point. The purpose of the show was simple: See if modern man and woman still had the skills to survive away from the comforts every day life now provided them...... But when things go wrong they quickly learn that they're very much alone and part of a much, much darker reality television program. From the makers of "The Game"...Praise For The Author“There is a ferocity about Matt Shaw's writing that is both welcome and also necessary when it comes to horror.” - Shaun Hutson, author of "Slugs"About the authorMatt Shaw is the published author, and film director, of over 200 stories including his infamous black cover range of extreme horrors. In those titles he is known for pushing boundaries and has been nominated for awards within the "splatterpunk" genre but do not be fooled - Shaw isn't only capable of writing the extremes. His dark psychological horrors are known for getting under the skin of the readers, causing both sleepless nights and restless dreams...Categories for "The Island"- Horror- Psychological Fiction- Survival Horror- Sexual Horror- Serial killers- Suspense horrorDid you know Matt Shaw directed a feature film based on his book "MONSTER"?Matt Shaw's directorial debut (MONSTER) is available to download on Amazon now! US LINK:https://amzn.to/2QAM2XBUK LINK:https://amzn.to/2RCImls