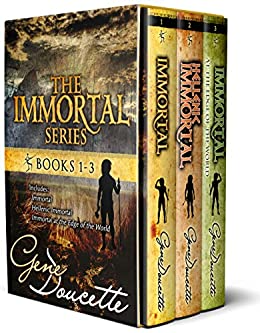 The first three books in the Immortal Series, in one box set!Book one: ImmortalSurviving sixty thousand years takes cunning and more than a little luck. But in the twenty-first century, Adam confronts new dangers—someone has found out what he is, a demon is after him, and he has run out of places to hide.Worst of all, he has had entirely too much to drink.Immortal is a first person confessional penned by a man who is immortal, but not invincible. In an artful blending of sci-fi, adventure, fantasy, and humor, Immortal introduces us to a world with vampires, demons and other “magical” creatures, yet a world without actual magic.Book two: Hellenic ImmortalAn oracle has predicted the sojourner’s end, which is a problem for Adam insofar as he has never encountered an oracular prediction that didn’t come true . . . and he is the sojourner. To survive, he’s going to have to figure out what a beautiful ex-government analyst, an eco-terrorist, a rogue FBI agent, and the world’s oldest religious cult all want with him, and fast.And all he wanted when he came to Vegas was to forget about a girl. And maybe have a drink or two.Book three: Immortal at the Edge of the WorldIn his very long life, Adam had encountered only one person who seemed to share his longevity: the mysterious red-haired woman. She appeared throughout history, usually from a distance, nearly always vanishing before he could speak to her.In his last encounter, she actually did vanish—into thin air, right in front of him. The question was how did she do it? To answer, Adam will have to complete a quest he gave up on a thousand years earlier, for an object that may no longer exist.If he can find it, he might be able to do what the red-haired woman did, and if he can do that, maybe he can find her again and ask her who she is . . . and why she seems to hate him.