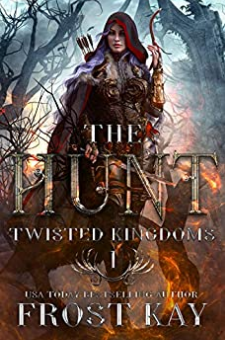 Death marked her from her very first breath.Being sired by a Madrid is supposed to be a blessing, but for Tempest, it's a curse that leaves her orphaned, penniless, and enslaved to a blood thirsty crown on the brink of war.Found too unruly to become a ward of the court, she's thrust into the care of the King's Hounds - the assassins and warriors responsible for protecting the kingdom. Driven by rage and an oath to avenge her mother's memory, Tempest throws herself into training.But becoming the first ever female assassin isn't enough. Now, she must obtain the heart of her kingdom's most feared enemy - the jester - a deadly shapeshifter hidden in a land twisted by myth and darkness.Revenge is never easy or cheap. Tempest is willing to sacrifice everything to see justice served. Even her own soul and freedom.Enter the world of the Twisted Kingdoms at your own risk where monsters wear pretty masks, good and evil are at war, and fairy tales don't exist. If you love fiery heroines, sexy villains, enemies-to-lovers romance, pulse-pounding action, mafia undertones, and dark fairy tales, you need to discover the new series readers are comparing to Holly Blacks's Cruel Prince and Leigh Bardugo's Six of Crows.