The Housewife Assassin Gets Lucky 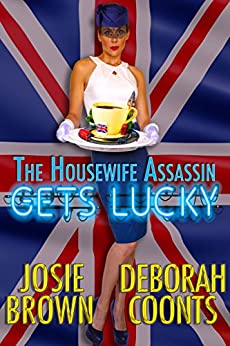 When two hot, haute heroines team up to solve a murder, neither can afford to be fashionably late.

No one expected to find a dead girl in the Royal Suite at the Babylon’s posh London club. Who would kill her? And why?

With little to go on and no friends to rely on, Lucky O’Toole, the Babylon’s Chief Problem Solver, is dispatched to…well, to solve the problem.

But she needs to be in Paris. Her fiancé—and, worse, his mother—are counting on her presence at a party in her honor in seventy-two hours, more or less. With a personal-life time-bomb ticking, Lucky hopes for a quick solution.

A mystery woman, seen leaving the Royal Suite just before the girl’s body is discovered, attracts Lucky’s attention. She has to be the key…

On loan to the CIA, assassin Donna Stone Craig and her crack black-ops team have stepped into a viper’s nest. First, they darn near get out-bid and overwhelmed at an auction to acquire a vintage purse hiding some critical intel its lining. Then a very important source Donna is to meet at the Babylon London Club winds up dead. And the young woman’s intel—bearing incredible global consequences—is encrypted. She was the only one who could give Donna the cipher, and she’s dead. Surely someone else would know. But, who?

It’s easy to see why Acme’s prime suspect is the tall brunette who acts like she owns the place. Lucky O’Toole shows up at the wrong time, and in the wrong place.

But before Donna and Lucky can find the right answers, they’ll need to overcome their reservations, and resolve their differences. But can they learn to trust each other before the real killer gets away?

They have to. Their lives—and world peace—depend on it.