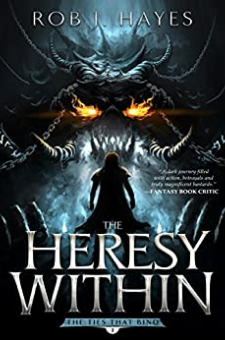 For generations the Inquisition has stood between humanity and the forces of darkness. It has failed.

Thanquil Darkheart is a witch hunter for the Inquisition, on a holy crusade to rid the world of heresy. He’s also something else... expendable. When the God Emperor gives Thanquil an impossible task, he knows he has no choice but to venture deep into the Wilds to hunt down a fallen Inquisitor.

Even the best swordswoman is one bad day away from a corpse. It’s a lesson Blademaster Jezzet Vel’urn isn’t keen to learn. Chased into the Wilds by a vengeful warlord, Jezzet makes it to the free city of Chade. But instead of sanctuary all she finds are more enemies from her past.

The Black Thorn is a cheat, a thief, a murderer and worse. He’s best known for the killing of several Inquisitors and every town in the Wilds has a WANTED poster with his name on it. Thorn knows it’s often best to lie low and let the dust settle, but some jobs pay too well to pass up.

As their fates converge, Jezzet, Thanquil, and the Black Thorn will need to forge an uneasy alliance in order to face the truth the Inquisition has been hiding from them all.