The Heart of Networking 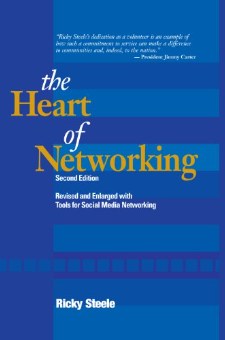 The Heart of Networking Second Edition is now available for purchase. The updated edition includes all of the original book and in addition to sections on social media networking. Steele shares examples of how he uses LinkedIn, Facebook, and Twitter to accelerate his business development activities. The book also includes the story of Steele’s greatest success using his personal network to not only change his life to but to change his community and the world.In practical, straightforward, real-world language, this new edition of The Heart of Networking, now revised and enlarged with tools for social media networking, reveals the secrets of building your own business network. That means nothing less than making a business environment that enables and promotes your own success by creating satisfaction among clients, customers, colleagues, bosses, investors, and the community. Steele’s book is a blueprint for business life, and while it requires a lifetime commitment to an ethic of service and excellence, the networking system offered here also pays immediate dividends. In twelve candid and concise chapters, The Heart of Networking presents Ricky Steele’s own remarkable story and tells you step by step —? How to get your reality ready for you? How to make those first all-important networking connections? How to create a savvy networking strategy and deploy effective networking tactics? How to overcome resistance in others? How to invest in networking? How to use the right social media networking tools effectively? How to combine the power of social media with in-person networking? How to make the most of networking events? How to take ownership of your networking contacts? How to reach the people with the power to do business with youThe Epilogue is a revealing look at a philosophy of networking that is also a plan for life:? How to win friends, not arguments? How to change lives through networking