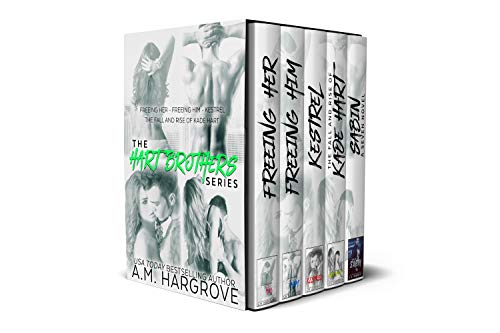 From USA Today bestselling author, A.M. Hargrove, comes The Hart Brothers Series Box Set, including the bonus book, Sabin: A Seven Novel. These are five full-length novels that are filled with suspense, emotional characters, and swoon-worthy men. If you like romantic suspense, page turning mystery, and unexpected plot twists, then download this boxset today.Freeing Her (A Hart Brothers Novel, Book 1)Gabriella Martinelli, Manhattan psychiatrist, has only one goal in life—to help abuse victims avoid the horrors she’s experienced. She volunteers and donates her services to anyone who needs them. Life is good until her nightmare resurfaces. He finds her and won’t stop until he destroys every piece of her.Kolson Hart is ruled by his dark past. Control is everything to him, from the boardroom to the bedroom. He doesn’t care to be involved with someone whose life is as screwed up as his. One look at Gabriella short-circuits everything. Can he free her from a life of fear when he can’t even save himself?Freeing Him (A Hart Brothers Novel, Book 2)After avoiding him for years, Kolson knows asking his father for a favor is selling his soul to the devil. Only the devil wants more than he's willing to pay. For Kolson, that’s Gabriella. Left with two choices, Kolson’s only way out is to do something so drastic, not even his father will be able to interfere. Will it be enough to guarantee Gabriella's safety?Kestrel (A Hart Brothers Novel, Book 3)Kestrel is a survivor. The monster who raised him is dead and he’s now building a new life for himself, shedding his dark and twisted past. He moves away from his family, but a surprise awaits him. Her name is Carter. Carter is also a survivor. Her past is every bit as horrid as Kestrel’s. But she has a secret. In order to protect it, she proposes something so outrageous, even she is shocked. Carter needs love. Kestrel craves human contact. Neither of them recognizes what’s right before their eyes.Will they see it before it’s too late?The Fall and Rise of Kade Hart (A Hart Brothers Novel, Book 4)"My name is Kade Hart and I’m a drug addict." Isn't that what recovering addicts are supposed to say? Kade isn’t sure. He’s not sure of anything anymore. Not since he met Juliette, his game-changer. He thought he’d finally managed to put the terror of his past behind him, come to terms with who and what he is. Until she walks into his life. She’s running from the people who slaughtered her family, people who want her dead, too. She makes him want to be the man who can protect and save her. But Kade is no one's hero. Or is he? Sabin: A Seven NovelThe Seven have a code: find and protect Judgment Day--a weapon of mass destruction that poses as a harmless necklace--and the ones who possess it at all costs; and never, under any circumstances, divulge information about ourselves.I have always abided by this code. Until Serena Callahan, a sassy, no nonsense female, finds the damn choker, and now I’m the one being choked by my own emotions. Ever since the day she enters my life that code means nothing to me. And for the life of me I can’t figure out why I’m allowing a woman to lead me around by her slender finger. But if we can’t find the necklace soon, none of it will matter anyway.My name is Sabin and I am the commander of The Seven.Each of these novels are page turning thrillers filled with characters that you will fall in love with. Download this boxset today for an adventure you won't soon forget.