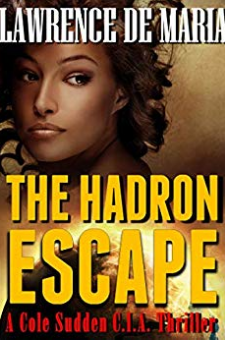 “PULITZER-NOMINEE LAWRENCE DE MARIA HAS ANOTHER WINNER IN COLE SUDDEN, AN ASSASSIN WORKING IN AN OBSCURE C.I.A. UNIT EVEN THE AGENCY WORRIES ABOUT!” (John Crudele, New York Post); “A LAWRENCE DE MARIA TITLE GIVES YOU MORE BANG FOR YOUR BUCK THAN JUST ABOUT ANYTHING IN THE BOOK MARKETPLACE TODAY.” (Florida Weekly); “A MASTER OF THRILLER DIALOGUE.” (Washington Independent Review of Books); “WHILE DE MARIA MAY HAVE BEEN AN AWARD-WINNING FINANCIAL REPORTER, HE'S AN AWFULLY GOOD FICTION WRITER AS WELL.” (Naples Daily News)***WHY DOES A WARTIME NAZI DISCOVERY ABOUT ALIENS SCARE THE WHITE HOUSE NOW?A trail that begins in 1945 with a perverted Nazi doctor autopsying a victim in a concentration camp leads to the Hadron Collider in modern-day Switzerland. Two of the C.I.A.’s best – and most lethal – agents are sent to investigate. With orders to kill, if necessary.Why? Because in Hadron’s world of nuclear physics, quantum mechanics, particle accelerators and space-time continuum, something is terribly wrong. And the fate of the world may be at stake!If you like thrilling action, exotic international locales, cutting-edge science and incredible twists, then THE HADRON ESCAPE is only a click away! ***MORE CRITICAL PRAISE!“Part spy novel, part science-fiction, THE HADRON ESCAPE is an exciting adventure on both levels. Pure escapism.” (John Crudele, NEW YORK POST) “What is really almost beyond belief is how easily De Maria has transitioned from the dry world of financial reporting to the wild and lavish world of novel writing.” (COLLIER CITIZEN)