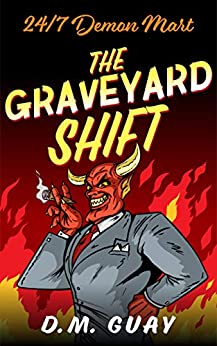 One loser, one talking cockroach, and one karate-chopping bombshell are all that stand between YOU and hell on earth.

Lloyd Wallace is the most clueless crossing guard the intersection of hell and earth has ever seen. So clueless, that he doesn't even realize the beer cave in the corner store where he works is the gateway to hell. The gate needs a hero, but Lloyd's a zero, a loser with a capital L. He's ten thousand dollars in debt and lives with his parents. He's been fired from every job he's ever had. He was the first thing his ex-girlfriend tossed to the curb when she upgraded her life. He had no money and no prospects until the night he accidentally slayed a one-eyed tentacle monster hellbent on world domination. And, impressed by his pure heart and bravery, the suave but devilish owner of the 24/7 Dairy Mart gave Lloyd a job.His coworkers—a karate-chopping bombshell and a talking roach with a really bad attitude—need Lloyd's help to keep the demons in line. Can he man up and become a world-saving hero? Or, will he remain a couch-surfing zero? The fate of the world is on the line. What could go wrong?24/7 Demon Mart is a new horror-comedy / comic fantasy series for fans of A. Lee Martinez (Gil's All-fright Diner), David Wong (John Dies at the End), Rick Gualtieri (Bill the Vampire), Christopher Moore (Practical Demonkeeping), Mark Cain (Circles in Hell series), and Heide Goody (Clovenhoof). If you love Exorcist-level demon vomit, brooding Lovecraftian hell monsters, and plenty of laughs, this novel is for you. The Graveyard Shift is the first book in the 24/7 Demon Mart universe, A frightfully funny series for horror comedy and comic fantasy fans.