The Further Adventures of an Idiot Abroad 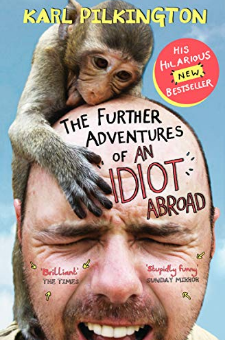 A new book on the travails of travel by “the funniest man on the planet” (Spectator).

Why on earth would anybody want to run with the bulls in Pamplona? Go “storm chasing” through Tornado Alley? Jump out of a plane? Have lunch with the queen or touch hands with the pope? The Further Adventures of An Idiot Abroad is a fresh take on the bucket-list mentality from television star Karl Pilkington, renowned for his comedic collaborations with Ricky Gervais and Stephen Merchant.

While he’s done some dumb things like putting sausages in a toaster, Karl has never been one for danger. But Ricky and Stephen managed to convince him to take on at least a few challenges, and in this hilarious and strangely inspiring book, Karl recounts brilliant stories of his adventures in Alaska, in Siberia, on a South Sea island, inside a gigantic rubber ball trying not to throw up, and more; states his opinions about what other people aspire to do with their lives; and shares his hard-won certainty that coming back home is the best thing about going away in the first place.