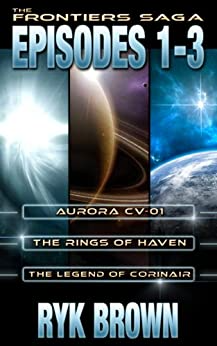 EPISODE 1: "AURORA: CV-01"A world recovering from a devastating plague… A brutal enemy threatening invasion…A young man seeking to escape the shadow of his father…A ship manned by a crew of fresh academy graduates…A top-secret experimental propulsion system…A questionable alliance with a mysterious green-eyed woman…What destiny has in store for the crew of the UES Aurora, is far greater than any of them could ever imagine. And this is only the beginning.EPISODE 2: "THE RINGS OF HAVEN"A ship stranded halfway across the galaxy…A difficult and lengthy journey home…A homeworld in urgent need of their return…And now they are running out of food…The crew of the Aurora must now trust their new allies in order to survive. But their situation may be far more serious than they imagined. And their actions could have repercussions across the galaxy.Their journey home may just have gotten slightly more complicated.EPISODE 3: "THE LEGEND OF CORINAIR"A captain coming into his own…A handful of refugees stranded on board…A possible traitor in their midst…A voyage into the territory of the very enemy that pursues them…Sometimes legends become realities in unexpected ways. It seems that fate has the crew of the Aurora firmly in its clutches.Episode 4, "Freedom's Dawn", Episode 5, "Rise of the Corinari" and Episode 6, "Head of the Dragon are available now on Amazon. Episode 7, "The Expanse" is coming in May 2013.