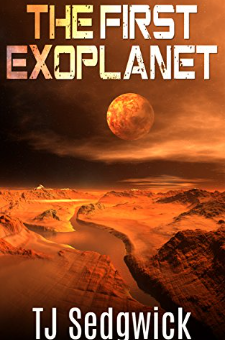 Reader Comments:'This book is one of the most enjoyable sci-fi books I've read in many years, and I've been reading sci-fi for over 50 years.' (Amazon UK)'Engaging story rooted in plausible science. Believable characters and situations' (Amazon US)'Both a spy story, a sci-fi masterpiece as well as a thriller full of suspense and intrigue, the story rockets on ever forward with twists and turns.' (Amazon UK)'This read like the golden age stuff I treasured as a youth, Arthur C. Clarke and co. have a worthy heir in Sedgwick. As much a spy adventure as a space caper, this story has plot and intrigue, and gripped me like nothing else in ages. I tore through it in very short time, and plan to re-read before long.' (Amazon UK)NOTE: This is the first of a two book seriesDescription:Six years after its launch in 2050, Dr Aidan Lemaie makes a stunning discovery with the Helios space telescope array. The Helios array has, for the first time, made the surface features of exoplanets visible to human eyes. Green forests, mountain ranges and blue oceans all seem to be visible on Avendano-185f, ‘only’ fifteen light-years away. The find is hailed as the saviour of a languishing Earth, locked in the same old cycle of war, poverty and overpopulation that it always has been. But the potential second-Earth would take at least 150 years to reach using the best conventional propulsion methods. Then another 15 years for any message of what is found to reach Earth.Only recently has the Western Global Alliance unveiled the experimental technology that might bridge the fifteen light-year distance across interstellar space. The Faster-Than-Light drive is a revolutionary technology with origins steeped in mystery - it seems at least half a century ahead of its time. Although experimental and imperfect, the technology is of unparalleled strategic value and Russian spymaster, Sergei Bekov, will stop at nothing to acquire it. His beautiful, deep cover agent, Dasha Morozova, has infiltrated the lives of the people heading the project. Will her attempts to mercilessly betray them succeed and further her repressive regime’s cause?Meanwhile Yau Min, an eccentric former-SETI scientist, struggles for recognition. He wonders why the transmissions, that he thinks came from the Avendano system, went on for many years then mysteriously fell silent. What caused the signals and what made them stop?Should humanity set off for the promise of a new world, to provide a fresh start for the people of a crowded, ravished Earth? Is it a pristine second-Earth or a post-apocalyptic nightmare? Is there an intelligent civilization or will humankind become the apex species unopposed? The new space race is on and the rewards in land and resources could be huge - but so could be the risks. Astrobiologist, Professor Ken Hawkins, senses a trap that could doom humankind - but the human desire to explore is irresistible.How will the actions of Captain Chris Buick and his Special Space Service squad change the course of history forever? With their motto Fortitude in Stellis - ‘Bravery Among the Stars’ have they got what it takes to protect all they have ever known and loved on Earth?Immerse yourself in a future world of discovery, espionage and struggle in this stimulating epic tale. As the intelligent, interwoven plot unfolds to reveal the shocking truth about humanity’s future, you will find yourself hooked until its thrilling conclusion.Who will like this novel?- Readers who enjoy the fusion of hard sci-fi with political, military and espionage elements.- Readers who enjoy long books, with a great deal of detail and a complex story.Notes - This is the Third Edition which follows professional editing - This book is written in UK English- This is the first of a two-book series