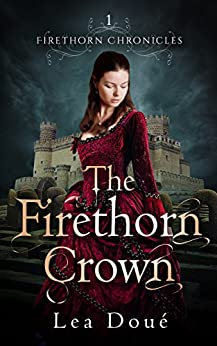 A kingdom of shadows. A soldier sworn to protect. A princess silenced by love.Plagued by her mother's matchmaking attempts, Princess Lily, the eldest of twelve sisters and heir to a mighty kingdom, struggles to prove herself worthy of her inheritance while avoiding the attention of unwanted admirers. Tradition forbids marriage with the man she loves, so she would rather rule alone than marry someone who only wants the crown.Fleeing an overzealous suitor, Lily stumbles into a secret underground kingdom where she and her sisters encounter a mysterious sorcerer-prince and become entangled in a curse that threatens the ones she loves most. She must find a way to break the curse before time runs out, or risk sentencing herself and her sisters to a lifetime of darkness.Fantasy, romance, and adventure combine in the fairy tale-inspired Firethorn Chronicles, an interconnected series of stand-alone tales drawn from The Twelve Dancing Princesses. Follow the sisters on their journeys in a land where sorcery is feared and dragons fly.