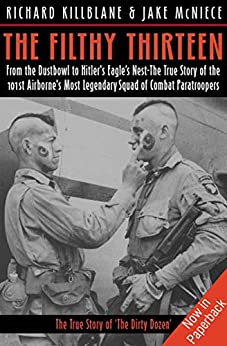 The true story of the 101st Airborne Division’s most notorious squad of combat paratroopers—the inspiration for the classic WWII film, The Dirty Dozen.

Since World War II, the American public has learned of the exploits of the 101st Airborne Division, the paratroopers who led the Allied invasions into Nazi-held Europe. But within the ranks of the 101st, one unit attained truly legendary status. Known as the Filthy Thirteen, they were the real-life inspiration for The Dirty Dozen.

Primarily products of the Dustbowl and the Depression, the Filthy Thirteen became notorious within the elite Screaming Eagles for their hard drinking and savage fighting skills. From D-Day until the end of the war, the squad’s heart and soul—and its toughest member—was a half Native American soldier named Jake McNiece. McNiece made four combat jumps, was in the forefront of every fight in northern Europe, yet somehow never made the rank of PFC.

The Filthy Thirteen offers a vivid group portrait of hardscrabble guys whom any respectable person would be loath to meet in a dark alley: a brawling bunch whose saving grace was that they inflicted more damage on the Germans than on MPs, the English countryside, and their own officers.