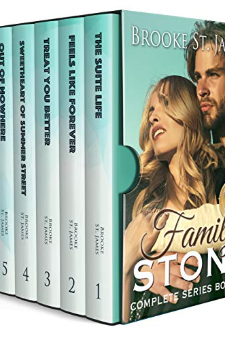 The bestselling series is now available as a complete box set! Get swept away in the romance of it all as the members of the Stone family each find their happily ever after. The Family Stone box set is a complete series that contains five full-length, sweet romances by author Brooke St. James.Book 1 - The Suite Life:I was completely exhausted when I first laid eyes on him. I had been traveling, and for the last twenty-four hours, sleep had evaded me. I knew I looked terrible, and I was relatively sure I didn't smell so great, either. It was not the most ideal moment to make a first impression. On a normal day, I wouldn't be so torn up about it, but today was different. This was the day I met Taylor.Book 2 - Feels Like Forever:Vi felt like she was happy being single. Her career was flourishing, and with all the time she put in to acting, looking for love was not on her list of things to do. That all changed when she stumbled upon a mysterious carpenter named Drake Christensen. Maybe it was the fact that he was a towering, strong, manly type of guy who was so unlike the men she was used to dating. Then again, it could have been that he seemed immune to her charms and fame. Either way, she had to win him over. She had to have his heart.Book 3 - Treat You Better:I was all wrapped up with putting my life back together when I first laid eyes on the man of my dreams. It was a shock to my system when I met this handsome stranger. He ignited feelings I had forgotten existed. My encounter with him was so brief, however, that I didn't even get his name. I just assumed we'd never meet again.Then, in the most unlikely of places, I found myself staring at him once again. Noah. He took my breath away. It seemed too good to be true. My life was complicated, and I couldn't believe that finding love again would be possible—let alone so perfect and effortless. But sometimes, when you least expect it, the unbelievable happens.Book 4 - The Sweetheart of Summer Street:Josh Cassidy found himself on a plane headed back to Boston. He had grown up nearby and had a lot of friends there, but his trip wasn't for pleasure. It was purely for business, and it was just about the weirdest business trip in the history of all business trips. He had one thing on his mind, and that was getting the money he needed to invest in the newest location of Patterson Place Hotels. The fact that the source of his funds might be a little odd (or perhaps even dangerous) didn't matter to him at all.As strange as Josh's itinerary might have been, one thing that was not on it was running into his childhood friend, Mattie Pruitt. When he first spotted her, he realized she was no longer the freckle faced girl he had grown up with. She had turned into a woman since they had last seen one another—a beautiful woman.Book 5 - Out of Nowhere:Ethan Ambrose was the heir to a company that had made his family a fortune. He had been groomed since he was a child to take over once his father retired. But his sights were set on a career as a film maker. No matter how much his parents protested, Ethan just didn’t want to give up on his personal goals. He longed for a day when his family would be happy for him instead of constantly pushing him to run the business.To top it off, he couldn’t ever seem to connect with the right woman. They all seemed to be more concerned with his fortune than anything else. He felt he was destined to be a bachelor. That was fine because he didn't have much hope for relationships, anyway.Then he boarded a flight bound for Los Angeles.Sitting next to him was the most unique and sincere woman he’d ever met. Molly Caldwell was simply different. The problem was, he would only be in California for two days, and he now had to find a way to spend every waking moment with her.