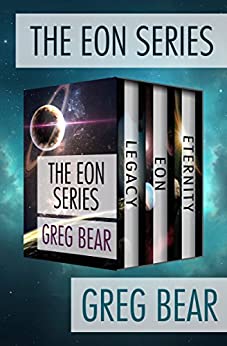 This saga of parallel universes from a Hugo and Nebula Award–winning author “may be the best constructed hard SF epic yet” (The Washington Post).

One of the world’s preeminent New York Times–bestselling authors of hard science fiction mesmerizes readers with a mind-expanding, three-volume masterwork about the creation of an alternate universe that breaks down all barriers of time and space, and its consequences for future and past generations.

Legacy: In the stunning prequel to Eon and Eternity, an agent of the masters of the Way—a man-made tunnel through countless dimensions—follows a renegade fanatic and his four thousand acolytes to a remarkable world of flora/fauna hybrids, where he is plunged into the terrible chaos of a raging civil war.

Eon: As nuclear tensions rapidly reach a breaking point in a volatile twenty-first century, a hollowed-out asteroid appears, mysteriously hovering above the Earth’s surface. The asteroid contains the remains of Thistledown, an abandoned city that was once home to survivors of a nuclear holocaust. Scientists must race to unravel its secrets before the human race is annihilated in the impending apocalypse.

Eternity: A devastating war has left Earth a nuclear wasteland. Orbiting the planet is an asteroid-starship containing the civilization of Thistledown, humanity’s future descendants. For decades, they have worked to heal their world and its survivors, but their resources are finite. They need to reopen the Way, a gate that would not only benefit Earth but also help the asteroid’s residents return home.

Greg Bear’s classic Eon trilogy is an astonishing feat of the imagination that combines humanism, cutting-edge science, and brilliant extrapolation. This masterful science fiction saga has no equal in contemporary speculative fiction.