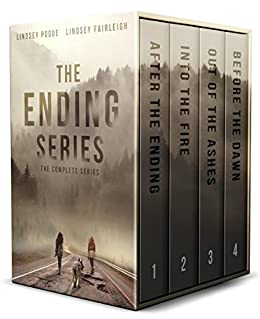 All four books of The Ending Series together in a single box set!The Virus spread. Billions died. The Ending began. Dani and Zoe may have survived the apocalypse, but the Virus changed them.Making it through the end of the world as they knew it was the easy part; it’s staying alive after the ending that will be the real challenge.AFTER THE ENDING, book oneA devastating flu pandemic wipes out 90 percent of the human population…but by some miracle, childhood best friends Dani and Zoe survive. Thousands of miles apart, the young women struggle to stay alive, making risky alliances, heartbreaking choices, and more than their share of dangerous enemies. They’re only certain of one thing—they have to find each other. But as Dani and Zoe make their way across the perilous United States, they come to a terrifying realization—the Virus changed everyone, leaving survivors either insane or evolved. Surviving the end of the world as they knew it was the easy part; it’s staying alive after the ending that will be the real challenge.INTO THE FIRE, book twoThe Virus changed them, but that was only the beginning—death…mutation…insanity…corruption…terror—all that remains is hope.In the wake of destruction left behind by the Virus, it took Dani and Zoe months to find each other. But their reunion was short-lived. Dani has been taken, and though little distance separates them, they might as well be worlds apart.OUT OF THE ASHES, book threeHope brought them together, but it's now fear that drives them...and threatens to tear them apart. Beaten and broken, Dani and Zoe head west, home to Bodega Bay, determined to leave behind the torment and horrors they experienced in Colorado. Along the way, they learn that danger can take many forms--other survivors, their friends, even themselves--and that things are rarely what they seem. Zoe is desperate to become the woman she sees in others' memories, while Dani struggles to conceal damaging secrets, risking losing herself--her humanity--completely.Together, they must rediscover the true meaning of friendship, love, and trust, and learn just how hard they're willing to fight for what remains of their shattered world. As relationships are put to the test, second chances are given, and new life emerges, death lurks in the most unlikely of places. To survive, Dani and Zoe must accept that sometimes hope alone isn't enough.BEFORE THE DAWN, book fourA year ago, the Virus killed off most people in the world.A year ago, strange things started happening to those who survived. Some of them transformed into something dark and sinister, while others evolved, becoming something more, something beyond human.A year ago, Dani and Zoe were lost. They traversed the country to find one another, losing some of the people dearest to them along the way. They fought for their right to simply live, uncovered long-buried secrets, and discovered irreversible truths. And after everything Dani and Zoe have been through—even with the battle wounds that they bear—they’re still not safe.It’s time for the struggle to end, for survivors to take back their lives, their families, their safety. It’s time to really begin to live, and to do that, they must wait for the first rays of dawn.BEFORE THE DAWN concludes the emotionally charged post-apocalyptic series, but there are still more stories from the world of The Ending Series:The Ending Beginnings Omnibus EditionWorld Before: A Collection of StoriesWorld After: A Collection of Stories (TBR)