The End of the Word as We Know It 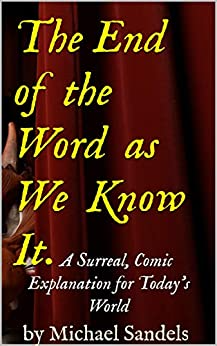 Michael Sandels’s unique, hilarious, novella The End of the Word as We Know It is the epic story of humanity's journey from 1960 through 2020, and how we arrived at where we are now. In a work that took 34 years to write, Sandels inventively explains it all. Who or what is responsible for Earth’s problems? This fun, surreal comedy attempts to provide the answer to this question through ten seemingly-unconnected stories, which by the end, become one cohesive novella! From 1960 through 2020, a dark, new presence began transforming the world and threatening all human life. All is not right on Earth, and this malevolent force has plunged the planet into mankind's worst nightmare. As the fate of humanity hangs in the balance, who can save us from ourselves? What needs to be done next is revealed in this surprising, twisting tale, which is presented in such an unorthodox fashion, it’s a little unlike any book you’ve read! One story’s plot-line, for example, is relayed only through documents. In another chapter, the words on the page rebel against their own writer. Other sections are told from the perspective of the character’s inner mind. Existential and comic in nature, the book tests the boundaries of reality and the written word.Experience The End of the Word as We Know It! You’ll never quite look at things the same way again! An often-hilarious, rich, engrossing read!