The End of Karma 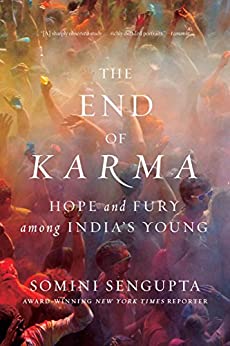 “[A] sharply observed study . . . richly detailed portraits.”—Economist
Somini Sengupta emigrated from Calcutta to California as a young child in 1975. Returning thirty years later as the bureau chief for The New York Times, she found a vastly different country: one defined as much by aspiration and possibility—at least by the illusion of possibility—as it is by the structures of sex and caste. The End of Karma is an exploration of this new India through the lens of young people from different worlds: a woman who becomes a Maoist rebel; a brother charged for the murder of his sister, who had married the “wrong” man; a woman who opposes her family and hopes to become a police officer. Driven by aspiration—and thwarted at every step by state and society—they are making new demands on India’s democracy for equality of opportunity, dignity for girls, and civil liberties. Sengupta spotlights these stories of ordinary men and women, weaving together a groundbreaking portrait of a country in turmoil.