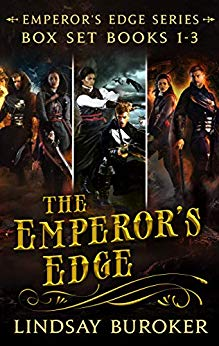 An enforcer wanted dead for crimes she didn’t commit...An assassin wanted dead for crimes he did commit…Normally, they would be enemies, but they both seek the same thing: exoneration. Unfortunately, a nefarious underground organization is attempting to kill the one man who could grant it to them, the emperor. If they want to win their freedom, they’ll have to battle powerful wizards, outscheme master schemers, and defeat bloodthirsty monsters, all while dodging friendly fire and evading the law. Exoneration isn’t easy.This boxed set includes the first three novels in this high fantasy adventure series: The Emperor’s EdgeDark CurrentsDeadly Games