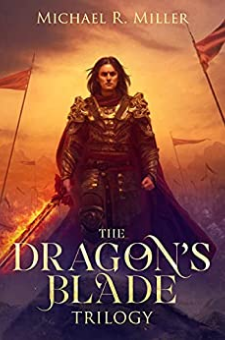 Includes all three books in The Dragon’s Blade Trilogy.Arrogant. Scornful. Full of pride. Darnuir, Prince of Dragons, cares nothing for the damage he's doing to the faltering alliance against the Shadow. He thinks himself invincible - right up till a mortal wound forces him to undergo a dangerous rebirthing spell, leaving him a helpless babe in human hands.Twenty years pass and demonic forces are poised to sweep across the land. With the alliance between humanity, dragons, and fairies fracturing, Darnuir will have to uncover the secrets of his past, seek redemption for his sins, and rally the disparate races if they are to survive.Only Darnuir can do this. For he's the last member of the royal bloodline and only he can wield the Dragon's Blade.His second chance is the world's last hope.100,000+ copies sold worldwide of this fast-paced epic fantasy series, perfect for fans of Phillip C. Quaintrell, Salvatore, Feist, and Brandon Sanderson.