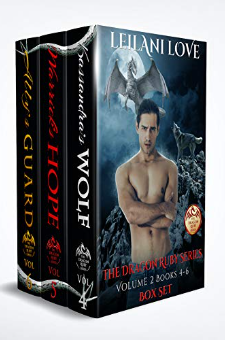 Enjoy books 4-6 of The Dragon Ruby Series~ Book 4 Kassandra's Wolf ~She drugged him because she had to. He won’t soon forgive that.Kassandra serves in the Dragon Guard and is the only one who knows how to mask her scent. Thatmakes her deadly and dangerous. When the exiled Dragon Prince, Dmitri, starts sniffing around Damien,a known wolf shifter, she knows something is amiss. She intends to know what that is. So, she seducesDamien, and drugs him to search his bar for the evidence she needs.Only to discover there is none.Damien knows she’ll be back. She was obviously looking for something. So, he sets a trap. He’s only toohappy when she falls into it.He gives her an ultimatum: spend two days and nights with him, or he turns her in to every authority hecan and post her pictures all over the internet.She has two days to find out what the Prince is trying to gain with Damien. She has to hurry. She has ajob to do and Damien is proofing himself to be a distraction she just can’t afford~Book 5 Warwick's Hope ~Only his mate-bond with Hope will get him out of this torment. Warrick has been imprisoned for forty years, tortured, not allowed to let his wolf out. He’s been left to rot while his twin runs with his pack. The only thing that gets him through his imprisonment is the knowledge that Hope, his mate, is safe. Hope thought he’d betrayed her and their pack and she had lived in hiding ever since. So, she’s surprised to find him broken, beaten, and barely alive when she and Damien attempt to reclaim their pack. Warrick didn’t betray her. Renewed life floods through her mate bond, but with it, grief and guilt. If only she’d been more in tune with her bond. If only she had believed in her mate. She might have been able to find him sooner. That has to wait, though. Gabriel, the man who took him and broke the man she loved, is still out there. And he wants to bring them both down. For good this time. ~ Book 6 Ally's Guard ~The only thing harder than watching over Ally was trying to keep his hands off her.Ally knew Jared thought she was a spoiled brat.At an early age Ally learned men's affection were fickle. But once her sister found true love Allyrealized what she had really wanted was someone to love her. As a Dragon Royal Guard one of Jared's responsibilities was watching over the Royal Family.When he was informed he would have to watch over the spoiled Princess while she went on a datewith a alpha wolf shifter Jared could easily think of a thousand ways his time would be better spent.Will Jared be able to keep his hands off her, or will the attraction between the two cause problems no one saw coming.