The Doom That Came to Dunwich 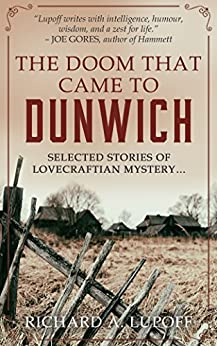 "Did you know that DNA extracted from a laboratory mouse and injected into the cells of a common fruit fly has produced eyes on the legs of that fly? Eyes, young miss, eyes. Think of what you’ve just read.”Lovecraftian stories are the bread and butter of the true horror fan.During his lifetime, Lovecraft himself encouraged other writers to develop stories in the vein we now call Lovecraftian: horror, based around the idea that Earth had been colonized by malign aliens in the remote past, long before mankind arose and became civilized, who eventually became worshipped and feared as evil Gods by their human servitors.Eventually these aliens had been “banished” to another dimensional limbo by a benign Elder Race, but might one day return to reclaim the Earth “when the stars are right.” That deep seated unease threads through this collection of Richard. A Lupoff's short stories that seem to share a common universe. Praise for Richard A. Lupoff:"Lupoff writes with intelligence, humour, wisdom, and a zest for life." - Joe Gorges, author of Hammett.Richard A. Lupoff began his writing career as a print and broadcast journalist while attending university. After earning his degree he served twice in the United States Army, first as an enlisted man, then as an officer. Following military service he worked for twelve years in the computer industry, while also serving as a guest lecturer at universities including the University of California (Berkeley) and Stanford University. As author and editor he has written more than fifty volumes, ranging from science fiction, mystery, fantasy, horror, and mainstream fiction to the evolution of cartooning and comics. He is a past winner of the Hugo Award, and a finalist for the Nebula and Oscar Awards. He has achieved the rare distinction of being represented in “Best of the Year” anthologies in three fields: science fiction, mystery, and horror.