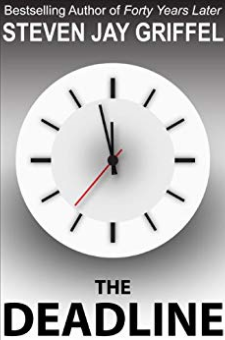 AMAZON BESTSELLING AUTHOR STEVEN JAY GRIFFEL'S EVERYMAN NOVELTHE DEADLINE is the story of David Grossman, a Baby Boomer approaching sixty who loses his high-paying corporate job, forcing him to review his options and priorities. Desperate for a last chance at personal fulfillment, David makes a one-year deal with his wife. If he fails, his life-long dream is likely over and he must return to the corporate grind, “a life lived under the steady lash.”At first, one year seems like ample time, but David had not counted on having to deal with a moody culinary genius from the Amazon, a high priestess of the dark arts, a dying mother, and sinister thugs from the Mob. With each passing day, Grossman feels the pressure of time slipping away and the likely end to his dream. THE DEADLINE is a truly engaging story, as only Steven Jay Griffel could write, about people fighting to achieve their dreams, no matter what the odds. In the center of it all is David Grossman, a man who struggles to push ahead, an everyman who still believes that decency, humor, and compassion are enough to survive in a world gone awry. Author of five novels, Steven Jay Griffel lives in Queens, New York, with his wife Barbara.What Amazon Customers have written about Steven Jay Griffel's earlier novels:About FORTY YEARS LATER:"Steven Jay Griffel explores what happens when you reconnect with that person you've wondered about through the years.""Griffel captures the feelings of lost love, missed opportunities and renewed friendships."About GRAND VIEW:"What Griffel does better than just about anybody is to delve into the complexity and subtlety of Human Nature. There lies his strength.""This story evokes myriad emotions as it takes you on an exciting journey … that explores the dynamics of marriage, friendship, family relationships, and serious illness."About GROSSMAN'S CASTLE:"Mr. Griffel is a true master of suspense in the best sense of the word, offering complex and compelling love rectangles and ghoulish hints to reveal the mystery of Grossman's Castle." About THE ISHI AFFAIR:"Steven Jay Griffel’s literary gifts are on full display.""There was no point in the story where I felt I could take a break. Full of twists and turns!! It was totally engrossing!!"