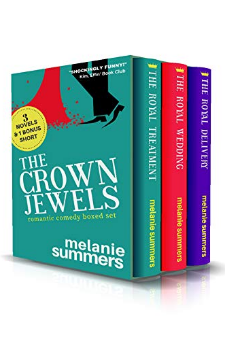 3 Wildly Funny Full-Length Novels + 1 Hilarious Bonus Short by international bestselling author Melanie Summers A gorgeously funny, romantic and seductive modern fairy-tale…I have never laughed out loud so much in my life…incredibly funny, witty, romantic, swoony…wonderfully charming and deliriously dreamy…~MammieBabbie Book ClubAbsolutely brilliant…original…hilarious…I have to HIGHLY HIGHLY HIGHLY RECOMMEND The Royal Treatment to EVERYONE! ~ Jennifer, The Power of Three Readers Book BlogFilled with witty and sarcastic humour, along with massive sexual chemistry…The Royal Treatment is the ultimate rom-com. ~ Tara, Bare Naked Words ReviewsTHE ROYAL TREATMENT 2018 READER'S FAVORITE AWARD BRONZE MEDAL WINNER For fans of Bridget Jones and The Princess Diaries comes a laugh-out-loud, feel-good comedy with a sizzling side of romance…Ultra-private, ridiculously handsome Crown Prince Arthur has always gotten by on his charm. But that won’t be enough now that the Royal Family is about to be ousted from power once and for all. When Prince Arthur has to rely on the one woman in the kingdom who hates him most, he must learn that earning the love of a nation means first risking his heart.Twenty-eight-year-old Tessa Sharpe, a.k.a. The Royal Watchdog, hates everything about Prince Arthur. As far as she’s concerned, he’s an arrogant, lazy leech on the kingdom of Avonia. When he shocks the nation by giving her the keys to the castle, Tessa has no choice but to accept and move in for two months. It’s lust at first sight, but there’s no way she can give in to her feelings—not if she wants to have a career or a shred of pride left when her time at the palace ends…Can two natural enemies find their forever in each other’s arms, or will they ruin each other to save themselves?THE ROYAL ENGAGEMENT BONUS SHORTWhen Prince Arthur's plans for an unforgettable proposal go awry, he and Tessa find themselves causing an international incident. Don't miss this never-before-published, laugh-out-loud story!THE ROYAL WEDDINGOne overbearing mother-of-the-bride. One king who will stop at nothing to see that the wedding never happens. One very accomplished lady-in-waiting who’s desperate to get her hands on the prince’s crown jewels. And one feisty bride who’s determined not to let anyone stand in her way of making it down the aisle to find her Prince Charming waiting… Get your copy today and be part of the feel-good fairy tale! THE ROYAL DELIVERY One very pregnant princess determined to finally win over the people (while at the same time becoming the perfect mom). One prince who wants nothing more than to protect his wife from her nasty critics (not to mention her horrible family). Two irritating in-laws who move into the palace due to a house fire. Enough tension to make the Dalia Lama snap. Don’t miss the hilarious conclusion of the Crown Jewels Series!